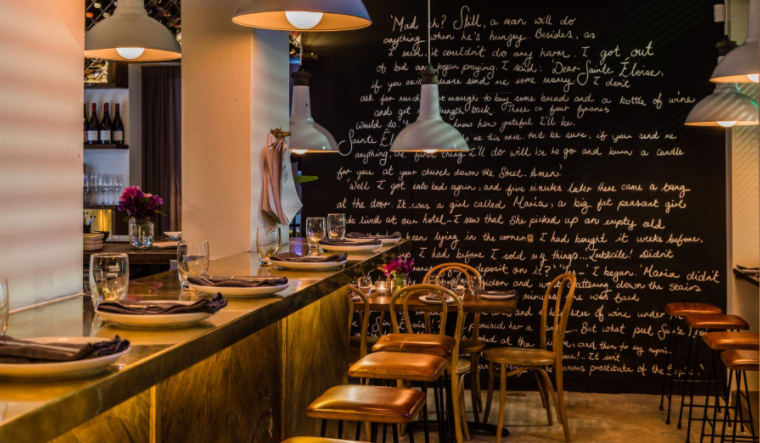 There aren’t enough bars named for starving waiters and accidental saints. Fewer still named for poverty memoirs. But here’s one that runs the trifecta.

If you’ve read George Orwell’s Down and Out in Paris and London, you might recall the chapter where a Parisienne waiter remembers praying to a picture of Sainte Eloise, patron saint of the quarter, in a particularly low and hungry moment. Somehow, miraculously, things turn around for him and he’s able to finally eat. Later he finds out he’s been praying to a picture of an infamous madam, Suzanne May.

He’s joined by co-pilots/wine nerds Nate Hatwell and Jasmine Natterer (she’s fresh from managing London wine bar Sager + Wilde). The three have created a 300-strong list, drawing inspiration not just from the wild, organic, and new but also shining a light back on the straight shooters and classic producers. The result is idiosyncratic, cerebral, and altogether exciting.

Here’s how to do it and have fun at the same time. Roll onto Llankelly Place, take a seat at the burnished copper bar and talk to the guys. You’ll see above them, displayed in the giant metal racks above the bar like some overly complicated version of French-leaning Tetris, a dizzying amount of booze.

Get ’em to pour whatever’s exciting them at that second. It might be a glass of Astro Bunny pet nat – perfect for palate reignition. Or it might just be a glass of Premiere Jus – so bright, it tastes like the grapes have been sunbathing and sipping creaming soda.

Maybe you’ll order a serve of malty Iggy’s sourdough on the side. Both make nice friends with a plate of very lightly smoked mussels, so plump and giving they’re almost lewd. Or maybe it’ll be raw slices of mulloway, dressed in a tangle of thinly slice raw onion and fried capers, finished with a little chilli salt.

The idea here is you can order as little or as much as you like. Get lightly toasted and waddle home or take a quick glass of sherry after a long day.

But if you do settle in for the evening, you could do worse than ordering big floppy, rosy rounds of rump steak, served on a rough parsnip puree and a generous slash of horseradish cream. If I were a vegetarian, I might be a little disheartened that the only large course is an acidic and spare dish of celery hearts, though as a committed eater of faces, I can tell you it’s a nice accompaniment to the steak.

This is a house of refreshment, first and foremost – order a little bread and a little wine and get your strength back, Sydney.

Pro Tip: Sit at the bar and let Swieboda and Co do the hard work when it comes to picking what to drink.