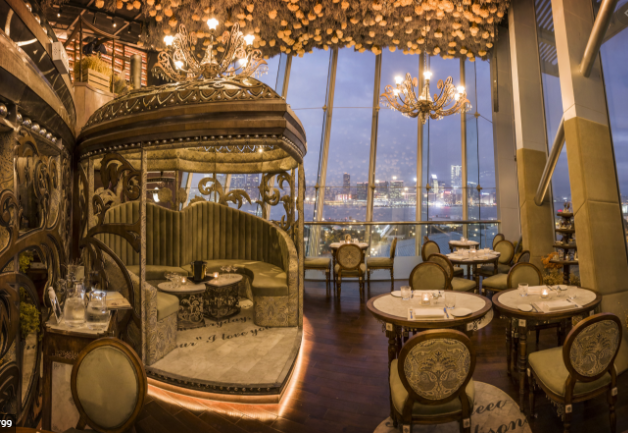 Renowned designer Ashley Sutton takes us on a guided tour of his newest eye-popping restaurant and bar: Dear Lilly

Few souls in the city are unaware of designer Ashley Sutton. Even if they don’t know him by name, they’d likely recognise one of his many concept bars in Hong Kong, including Ophelia in Wan Chai, and The Iron Fairies, J. Boroski and Yojimbo in Central. Now, Sutton has now brought his unparalleled artistic eye to ifc with Dear Lilly, a new restaurant and bar in collaboration with restaurant group Dining Concepts.

When you walk into Dear Lilly, the first thing that greets you is the powerful scent of dried lavender. Look up and you’ll see bouquets of the bright purple flowers alongside golden camomile, strung upside-down across the entirety of the ceiling. Let your gaze drift down to the heart-shaped marble inlay set into the floor, engraved with extracts from love letters. Allow your eyes to linger over the floor-to-ceiling shelves lined with tiny vintage perfume bottles, which are filled with dried flowers, love letters and poems scratched onto vintage paper. They’re hung above the bar and strewn along decorative tables with antique typewriters, rolls of ribbon, and charming silver charms and statuettes.

Three heart-shaped booths take centre stage in the room. Shaped like silver trinket boxes with their intricate lids half-opened, the middle section serves as the bar, while two more booths on the side serve as seating areas. Towards the back of the room, a spiral staircase, decorated with little charms that dangle at the edge of each step, leads to a mezzanine floor above where you can gaze down upon the bar in secret. The intimate space stops us in our tracks from the moment we ascend – and the more time we spend there, the more we discover about Dear Lilly’s romantic interiors. It’s a few moments later that we spot Sutton, sitting quietly at one of the side tables, his shirt sleeves rolled up to reveal myriad tattoos on his forearms.

“Take an attitude of going all for it without worrying too much about the actual results. Don’t hesitate because of your own fear”.

Nothing seems too challenging for Sutton to tackle – among other daring stunts, he pinned thousands of butterflies to the roof of The Iron Fairies – but he calls Dear Lilly his most ambitious project yet. The entire project took nearly three years from conceptualisation to completion. “Two-and-a-half years was spent just sourcing the stuff; it’s been a very long time in preparation,” says Sutton. The heart-shaped alcove proved quite difficult to create, the designer recalls: “To curve and twist the steel and cut it – that took us a long time.”

For someone who has delivered some of Hong Kong’s most recognisable bars, it’s surprising to learn that Sutton never thought he’d end up becoming an interior designer. “It was an accident that I came into this field,” he recalls. “Originally, I wanted to build boats. I love the ocean.” Sutton’s office, in fact, is located on a boat in Fremantle, Australia, where he also owns a 200-year-old warehouse loft that he calls home.

Sutton dropped out of school at age 14. His first job was at McDonald’s, but soon after, he landed an apprenticeship making staircases and glass. By 18, his career had taken some strange twists and turns – he had tried his hand at mining and had written children’s books. Later, Sutton brought his books to life by opening a factory where he made intricate fairies out of iron; the public could drop by and observe. “I was good at making things,” says Sutton. “I was living in America at the time, and I got word that people who came to watch wanted something to eat and drink on the side.” This planted the seed for his very first bar, The Iron Fairies in Bangkok, years later.

If it feels like there’s more to Sutton than he lets on, then the same goes for his restaurants and bars. Dear Lilly is a love letter – its name comes from one of the First World War letters Sutton collected. But Dear Lilly is also a floral wonderland; it makes you wonder momentarily if you’ve stepped into a florist’s shop rather than a restaurant and bar.

Sutton concedes the point. “Primarily, it’s a florist’s – a vintage florist’s. I wanted it to be a living, working florist’s concerned with the making and selling of flowers. It’s a place to have high tea and drinks, and also to buy special arrangements of flowers,” he says, gesturing towards the small perfume bottles.